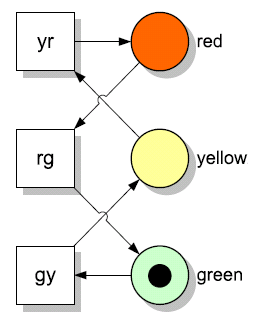 a) Give a Petri net that is able of behaving like a German traffic light. There should be three places that indicate the current colour and all of the state transitions given above should be supported (cyclic).

b) Refine the Petri net to behave exactly like a German traffic light; e.g. no other state transitions than given above should be supported.

More information on place/transition nets can be found in the book in chapter 4.2.